Often referred to as, “The Heart of the Antelope Valley”, the City of Lancaster is located in Los Angeles County, approximately 70 miles north of the City of Los Angeles. Lancaster’s history dates back to the 1880’s when a real estate developer bought parcels of land and settled them, naming the area after his former home, Lancaster, Pennsylvania. Lancaster is widely considered to be an “aerospace” town, as it borders Edwards Air Force base, which until the discontinuation of the NASA Space Program, was one of the landing sites of the Space Shuttle. A short commute from the busy Metropolitan City of Los Angeles, Lancaster residents have access to many of the benefits of big city living while enjoying an overall lower cost of living.

Lancaster is culturally and ethnically diverse, with citizens of all backgrounds participating in the community. With affordable housing prices, a beautiful desert landscape and endless growth possibilities, Lancaster is a very attractive choice for families who are looking for a safe, close knit community to call home. Historical population data shows a consistent growth trend in the area, and large population bursts can be directly attributed the changes in the economic activity, specifically the aerospace industry, in the area. According to the 2010 US Census Bureau, Lancaster is home to 156,633 people. When you look at Lancaster, California on a map, you see a small suburban town on the western end of the Mojave Desert. It hardly seems like the prime location for one of the most energy efficient and sustainable communities in America, but Lancaster is becoming just that. With a goal of reaching “Net Zero” status by 2020, all eyes are on this small suburban town with big renewable energy dreams.

Heather Swan, Sr. Projects Coordinator for the City of Lancaster defines reaching Net Zero as “producing as much or more renewable energy within city limits as the city uses”. In response to skyrocketing energy prices and the need for renewable energy options, the Lancaster Power Authority (LPA) was created in 2010. The High Desert Power Authority soon followed, created to assist in transmission of renewable energy. In 2012, Mayor R. Rex Parris and City Council members set a goal for the city of Lancaster to become the “alternative energy capital of the world”. The goal has been broken into two parts: Phase I – Producing 250 megawatts and Phase II – producing 530 megawatts. The City is rapidly approaching completion of its Phase I goal, expected to be reached by 2015. 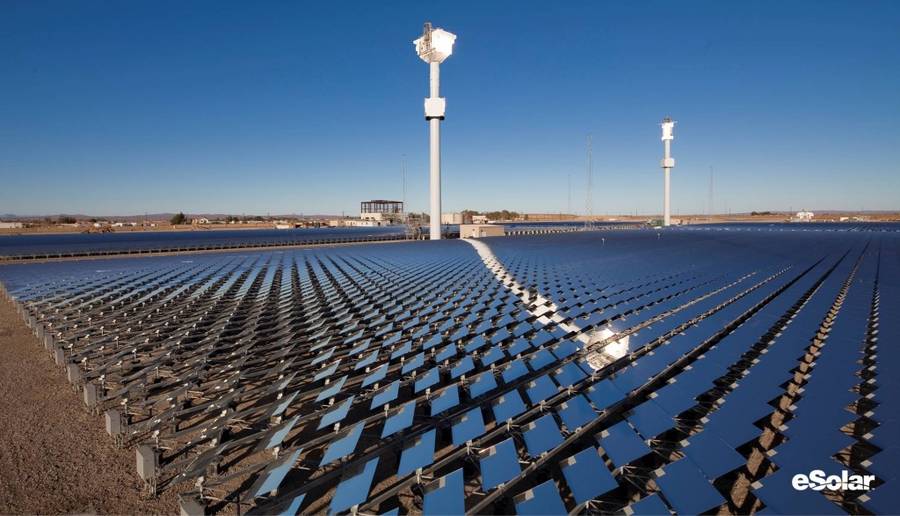 Solar Ranch One. Image via eSolar

In 2011, construction of the 230 MW AV Solar Ranch One began, in a former agriculture field who’s soil was no longer viable for farming. While much of Lancaster’s solar is photovoltaic or PV, it is also the site of the country’s first power tower by eSolar (5 MW). Through a partnership with SolarCity many “behind the meter” solar has been installed on residential units within the city. “Behind the meter” residential solar installation allows residents to off-set their personal energy usage. KB Home is in the process of offering net-zero homes in Lancaster with models available for touring.

Along with installations at many city facilities, through a partnership with Lancaster School District and Eastside School District, the city has installed solar systems on carports at 25 local school sites, allowing the schools to offset just over 90% of their energy needs and saving the school district $420,000 in the first year of operation. The new Kaiser facility being built within the city, upon completion, will be the first Net Zero Hospital. The city also adopted an initiative that requires all new residential units to generate a percentage of solar energy. According to the city Environmental Planner, Jocelyn Swain, the city has issued nearly 1500 permits for residential solar installation, with between 25-80 new permits being issued each month.

BLVD before Complete Streets. Image via City of Lancaster.

The Net Zero City initiative is part of a bigger plan to move Lancaster into the future. In 2010, an approximately three quarter mile stretch of Lancaster Boulevard was renovated to a Downtown destination, developed on the fundamental design guidelines of “complete streets”. The transformation included upgraded lighting, street furniture, traffic pattern, landscaping and the opening of new local businesses, marrying activity and community in a vibrant and walkable city center.

“Lancaster residents have always loved Lancaster Boulevard, now they have a reason to love it” said Planning Director, Brian Ludicke. The plan to revitalize the Lancaster Boulevard began in 2006 with a massive community outreach effort. As a result of the project, a once over looked space has since been revitalized into the “place to be” within Lancaster. New traffic patterns, eclectic and interesting store facades, one of a kind meal options and tributes to local “Hometown Heroes” make the boulevard an exciting place to eat, play and explore. Whether you’re looking to catch the latest independent or blockbuster film at the BLVD Cinemas, enjoy exhibits at the Lancaster Museum of Art and History, pickup some fresh local produce at the weekly Farmer’s Market or celebrate the holidays with 30,000 of your neighbors, there is something for everyone at the BLVD.

As of January 2014, over 145,000 square feet of commercial space has been constructed or rehabilitated, over 800 permanent jobs have been created and revenue from the downtown area is up 119% in 2012 compared to 2007, with an estimated $280 million dollars of economic output. The overall number of traffic collisions has been cut in half, while injury-related collisions have plummeted 85% as a result of the modified streetscape and one lane traffic pattern. The BLVD is, as a result of its renovation, a safe and economically viable part of the city.

Sustainability is the future and Lancaster is paving the way for other cities to follow suit. Whether its creating a pedestrian friendly downtown or leading the race towards becoming the alternative energy capital of the world, this little desert town is making big things happen and will be one to watch in the future.

Melodi McGee Melodi McGee works in Public Administration for a municipality in the Pacific Northwest. She graduated in 2014 from California State University Northridge with a Bachelors of Arts Degree in Urban and Environmental Planning and a minor in Sustainability. Melodi is extremely passionate about the environment and education and believes that the key to ensuring the longevity and vital of our planet lies in promoting healthy environmental attitudes and practices to youth. Her greatest passion is her who children who inspire her to make the world a better place to be. Melodi is a self proclaimed life-long learner and is excited to be a part of the PowerHouse Growers contribution team and share ideas and innovations with like minded individuals.

9 Characteristics of People Who Live Longer

Where are the Women in Sustainability?